On Kate Spade and Anthony Bourdain and Suicide 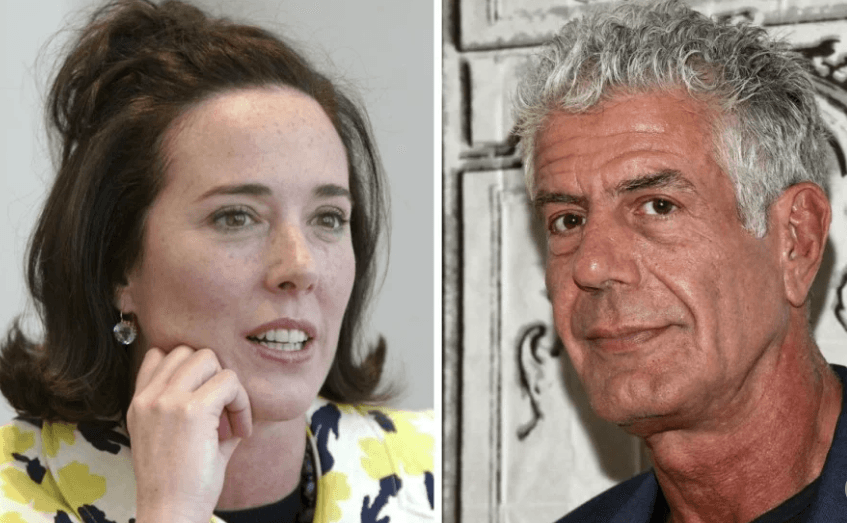 It’s only been a few days since the sad news of Anthony Bourdain’s suicide, and just a few more since we found out that Kate Spade took her life.

While both are tragic events, the numbness starts to wear off and we’re caught up in the ever-explosive news cycle of current events. We’ve had a few days of TV’s talking heads telling us that the suicide rate has risen 25% in the whole of the United States and 30% in a few states since 1999. In fact, according to the CDC, “Suicide is the leading cause of death for Americans.” Though Kate Spade and Anthony Bourdain have dominated the recent news coverage because of their celebrity, we still lose 18 current or former military members to suicide each day as well as countless people of all ages and walks of life. Statistics show that in 2016, there were 44,965 recorded suicides. And this includes our young people where suicide is the #1 cause of death. A new study from Vanderbilt University, published last month in the academic journal, Pediatrics, reports a more than doubling from 2008 to 2015 of school-age children and adolescents hospitalized for suicidal thoughts or attempts.

But of all people! Spade and Bourdain? How do these two people – seemingly at the height of success, find it necessary to take their lives; to leave their children, friends and loved ones behind? In a word, Pain. Pain so deep, so long and so wide that a person can no longer bear another moment of it.

The oft-taboo subject of suicide comes to the fore every now and again when it involves a well-known person. Seemingly at the peak of their celebrity, there is a commonality in what we know of Ms. Spade and Mr. Bourdain – both were at the peak of success in their chosen fields. Spade’s simple handbags have become an iconic fashion accessory. And, who didn’t really want to be Tony Bourdain? Both were in relationship flux – Kate Spade was somewhat estranged from her husband and Bourdain had divorced his wife and was in a new relationship. Could the feelings around those relationship trials been the trigger?  We will never know. Any “why” can only be a conjecture. Tragically, both left impressionable daughters behind – Spade’s daughter is 13 and Bourdain’s daughter is 11.

Over the last several days, every major cable and network news show has displayed the Suicide Hotline telephone number (800-273-8255). In the first week since this started, call volume is up 65%! We are advised to watch for tell-tell signs that indicate that our loved ones may be considering taking their own life. Some of these can be found here: https://save.org/about-suicide/warning-signs-risk-factors-protective-factors/

But let’s be honest. A call to the Suicide Hotline is not a solution. It may be a momentary respite, but it’s like bringing a squirt gun to a three-alarm fire. The helpline volunteer may talk the caller off the ledge, literally in some cases, but it’s not a solution. Callers rarely go back to hotlines a second or third time. The real solution is long-term therapy with an experienced therapist that can get to the source of a deep-seated problem or depression that is the real reason that someone contemplates taking his or her own life. Appropriate medication can also be a key ingredient in the treatment of depression. The research shows that the best treatment is not just medication, or not just psychotherapy, but the combination of the two has the highest probability for a successful outcome.

Suicide is not the disease. It is an action taken when a person cannot seem to crawl his/her way out of the dark tunnel one finds oneself in. It is often the only path that someone sees to save himself or herself from the torturous pain that darkens their entire lives. People don’t take their own lives because they want to; they do it because they see no other way out of a set of circumstances. They can no longer tolerate the pain that has become unbearable. Suicide’s trigger is depression.

Depression is not something to mess around with; more than 16 million adults in the United States, about 6.7% of the population age 18 and above, suffer from depression in a given year. While major depressive disorder can strike at any age, the median age of onset is 32.5 years old (https://adaa.org/about-adaa/press-room/facts-statistics).

Unfortunately, there’s still a stigma that surrounds mental health issues, and many people view disorders such as depression as a weakness, or an excuse for their lack of motivation or poor performance. I have many patients who have been dragged to therapy, usually by their significant other, completely against their will because of the shame that they feel about being ‘weak’ by sharing their feelings and their situation. And I have patients who will readily come for therapy, but refuse any medication that will most likely help them in their struggle and to get them to a place where talk-therapy can best do its work. It is surely the makings for a conundrum.

But, similar to the way anyone can develop certain physical health issues, mental health issues are real and they aren’t always preventable. It is amazing how suicide sometimes seems to come out of the blue, and while that is not generally the case, sometimes it really does. A really bad break-up, a fight with a friend, a real or perceived humiliation can propel otherwise well-adjusted persons to impulsively decide to “check-out.” Much of the time, however, suicide has been thought about for a long time before a person pulls the proverbial trigger to ultimately exit via suicide.

I don’t write of suicide from a distance. It has visited my family, and, I’m often afraid that it lurks in the dark corners of my most loved ones. I have lost family members to suicide.  I am a trained therapist, and yet, I fear that I may be unable to prevent another tragedy involving someone I care for. Because of that, I am compelled to share these insights with you.

Don’t be afraid to ask your friend or loved one if they are thinking about suicide. If they have the courage to bring it up to you, do not change the subject! You most likely feel uncomfortable, and totally ill equipped to deal with it. That’s not what’s important. What is important is that your loved one has finally decided to talk to you about it. Do not attempt to resolve it and certainly do not make them feel like a lesser person. Listen, and ask some basic questions: “Have you talked to a professional about this?” “Do you know someone that you can talk to?” “Are you thinking about this now?” Then, help them find professional help! Use Google on your phone and find a therapist near you. Have your friend call for an appointment. If you do not have a local resource for a qualified, experienced therapist, contact me. I’ve been treating people with the root causes of depression that can lead to suicide for more than 25 years. If you or your loved one is in or near Athens, GA, we can arrange for an office visit. If you’re further away, we can use Skype or FaceTime, or maybe just an old-fashioned phone call. The most important thing you can do at this moment is to call my office at 706-552-2820 or email me at dr.brawner@athensareapsychotherapy.com

Don’t treat your friend or loved one like they have Ebola. You needn’t call them every hour, but do be more attentive. Stop by to see them. Include them in activities, “Let’s grab dinner after work?” “Let’s see that movie this weekend!” Make plans for the near future so that they have a positive to look forward to. Don’t attempt to be Captain America or Wonder Woman. Just be their friend and show them that you think about and value them

Perhaps the lesson that we should learn from Kate Spade and Anthony Bourdain’s unexpected exits is that we never really know where a person lives in their heart and soul when home alone in the dark. I encourage us all to talk, share, and to really listen to one another.